Mr. Hogan has been part of the EB-5 program since before the implementation of what is now known as the Regional Center Program. In 1997, he established CMB Export, LLC, the first of CMB’s 16 Regional Centers. CMB Export, LLC remains one of the oldest active regional enters having been established under the Regional Center Pilot Program.  Since those earliest of days, Mr. Hogan has been a vital part of paving the way on how all regional centers in the EB-5 industry operate today.  Mr. Hogan and CMB pioneered the capital expenditure model which allowed CMB to be the first regional center to establish job creation solely upon indirect and induced job creation.  CMB EB-5 partnerships were also the first to implement the loan model of investment for EB-5 partnerships.  CMB was founded upon the vision of making the EB-5 program beneficial to areas of California that had suffered through high unemployment as a result of Base Realignment and Closure (BRAC).  BRAC had devastating impacts in California in the mid 1990’s and left many former military bases virtually jobless and without any immediate use.  CMB’s first ten EB-5 partnerships helped revitalize these former military base regions that have now become huge job generators such as distribution hubs for some of the largest companies in the country.  Mr. Hogan’s vision that investments into infrastructure would counteract the jobs lost due to BRAC was correct and those early CMB investments continue to create tens of thousands of jobs yet today. 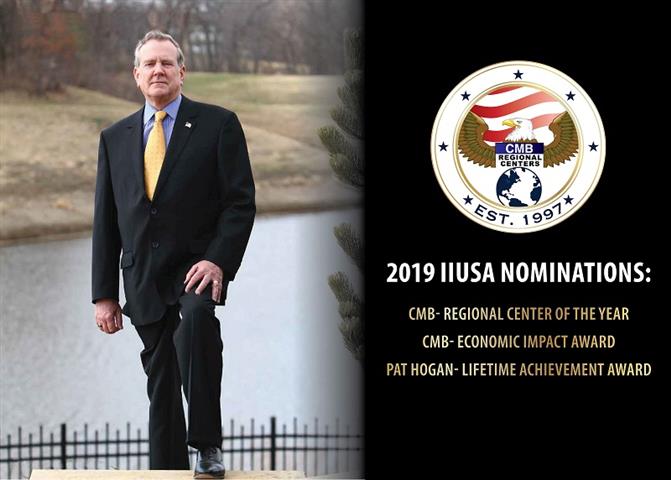 CMB was nominated for Regional Center of the Year, and we are hopeful that you believe this honor is fitting.  The Regional Center of the Year Award recognizes an IIUSA member Regional Center who has demonstrated excellence as it relates to the core values of IIUSA: collaboration, ethics, and strategic thinking. This Regional Center has served as a leader and example for all Regional Centers throughout the past year. Throughout this past year, as in all those years before, CMB has continued to lead the way for the EB-5 industry.  CMB continues to fund and manage dozens of EB-5 partnerships that are providing investment into projects throughout the United States.  CMB operates 16 regional centers with geographic scope in 22 states and Washington DC.  Through 68 partnerships, CMB has raised in excess of $3 billion dollars that have helped to create an estimated 172,000+ new American jobs.

CMB Regional Centers was also nominated for the Economic Impact Award,  which recognizes the regional center who has had an exceptional impact on all aspects of economic growth.  Throughout their 20+ years, CMB EB-5 partnerships have been able to impact many different industry sectors in all parts of the United States.  In rural North Dakota, an ethanol plant was constructed with CMB EB-5 funds, while simultaneously reopening a shuttered power plant, both of which have created many new jobs.  All of the projects that CMB has been a part of have helped to create thousands of immediate jobs to better the communities they are in.  The total impact of CMB’s EB-5 investments goes well beyond the economic impacts measured through the EB-5 program.  Many of CMB’s partnerships have funded infrastructure that has served as the platform for future business and the jobs they bring. Those former California military bases are shining examples of “if you build it they will come” as new business continue to be built upon CMB funded infrastructure investments.

CMB would also like recognize Hillwood as a nominee for the U.S. Champion Award.  Hillwood is a U.S. developer that has used EB-5 funds from 25 separate CMB EB-5 partnerships.  These 25 partnerships are made up of 1,334 limited partners and a total of $644.5 million in EB-5 capital investment.  The uniqueness of Hillwood goes above most other developers that have relied upon EB-5 funding, as two of Hillwood’s projects have been in non-TEA areas. To date, investors in Hillwood related CMB partnerships have received over 1,000 I-526 petition approvals and over 200 I-829 petition approvals.  Additionally, Hillwood has already returned capital under the loan agreements to those early CMB partnerships.

The ultimate goal of every EB-5 petitioner is to obtain permanent residence in the United States. I am requesting your support and votes acknowledging the amazing accomplishments of CMB under the leadership of Patrick Hogan.  I would also ask that you assist in recognizing Hillwood for the U.S. Champion Award.
Share This Post: Twitter | LinkedIn | Facebook

&nbsp; ROCK ISLAND, Ill., Rumors have spread throughout the EB-5 world that the EB-5 program is dead! For years, many in the industry have predicted changes...

Where are All the EB-5 Real Estate Juggernauts?

Three years ago, proposed changes to the EB-5 regulations were published by the United States Citizenship and Immigration Service (USCIS) for the first time. ...