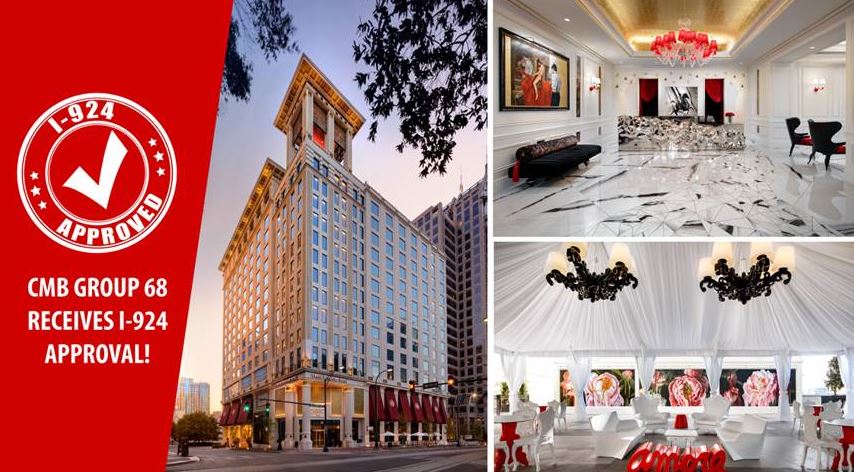 On January 22, 2021, CMB Regional Centers (CMB) received USCIS approval of our Group 68 partnership: The Grand Bohemian Hotel in Charlotte, North Carolina. The Group 68 partnership help fund the development and construction of this 254-key, 15-story hotel featuring approximately 282,668 square feet of gross building area with approximately 170 spaces for customer parking. The project was designed and branded, and is now managed by, the The Kessler Collection, and will be marketed as an upscale boutique brand of the Marriott Autograph Collection. The hotel is located in the heart of downtown Charlotte and celebrated its grand opening on August 5, 2020.

Group 68 consists of 60 EB-5 investor families that contributed $30 million in EB-5 investment capital to be used for the development and construction of this project. Through the I-924 exemplar approval, the USCIS confirmed that the projected job creation satisfies the requirements of the EB-5 program for all 60 limited partners in the Group 68 Partnership.

This hotel was the first of two CMB partnerships featuring hotels developed by The Kessler Collection and its affiliates, which is a real estate development and management company that specializes in boutique, historic, independent and franchise-affiliated hotels. Founded by Richard C. Kessler in 1985 in Atlanta, Georgia, the company has a reputation as an industry leader and innovator with the Grand Bohemian Hotel and Bohemian Hotel brands, as well as expertise in the development of properties in historic districts and historic rehabilitation projects.


CMB was originally established in 1997 by our CEO and Founder, Patrick Hogan. Throughout our over 20 year history, CMB has received approval from the USCIS for 68 partnerships at the initial I-526/I-924 stage, with 27 partnerships achieving I-829 approvals for a permanent green card.

Through these first 68 approved partnerships, CMB has been able to help provide a path to permanent residency to over 4,900 immigrant investor families. Our company motto is to always put the client and their goals in front of our own. Through this approval of Group 68, CMB continues to be the leader in the EB-5 industry in providing quality EB-5 opportunities for immigrant families around the world.

&nbsp; CMB Regional Centers Receives I-924 Approval For Its Group 68 Partnership: The Grand Bohemian Hotel in Charlotte, NC This marks CMB’s 68 th has...

How to Achieve EB-5 Investment Success in 2021

EB-5 Visa Projects with Loans Repaid With 2020 behind us, we are all looking forward to a much brighter year ahead in 2021. Although we’re now only one month...

It is Time for a Bipartisan Effort to Reform, Reauthorize and Restore Congress’ Intent for the EB-5 Program CMB Founder, Pat Hogan Discusses The Reforms ...