Last Thursday, June 27 the Office of Management and Budget (OMB) finished their review of the EB-5 Modernization Regulation. This review was the last step in the 13 step rulemaking process before publication of the final rule in the federal register and thus the new regulations becoming effective. The administration procedure act (APA) sets out the guidelines for all regulations in the United States. According to this act, there is an amount of time allocated from the time of announcement and the time before a regulation becomes effective.

The United States Citizenship and Immigration Services (USCIS) first published the proposed new rules for the Immigrant Investor Program Modernization in January 2017. After a period of public comment the USCIS on February 22, 2019 submitted their proposed new regulations to the OMB for final review.

Last week, when OMB sent their review of the new regulations back to the USCIS, citing “consistent with change”, indicating that OMB for the most part agreed with the USCIS draft regulations but made substantive changes.

Based on the review, procedure dictates that the final rule be published in the federal register at least 30 days before the regulation becomes effective. If the regulations were considered “significant regulations” it would require at least a 60 day time period before implementation. It appears OMB has determined in their review announced on January 27 that this is not a “significant” rule which seems to indicate a time period of 30 days not 60 days before enactment of the new regulations. It could be argued the EB-5 Modernization Regulations do affect investors lives thus it could be determined that it is a “significant” regulation, however this is up to interpretation. No one will know what the grace period will be or what changes OMB made until publication of the new rules occurs, however it appears there will be at least a minimum 30 day grace period before enactment of the final regulations. The contents of the final regulation will remain confidential until the regulations are published.

Individuals seeking a U.S. permanent green card under the EB-5 program may find that it could cost them nearly 3 times as much as the current regulations require. The new Modernization Regulations pending call for increasing the required investment amount from $500,000 to $1,350,000 in a qualified Targeted Employment Area (TEA) which is an increase of approximately 170%. It also calls for the $1 million investment to increase to $1.8 million (80%) for a non-TEA. Prospective EB-5 investors whom file an I-526 petition before these regulations become effective lock-in the current $500,000 investment amount and keep the current procedures for the process of adjudicating their petition before the USCIS. Luckily potential EB-5 investors can file petition now and avoid this price increase, likely to occur in the next 30-60 days.

The new regulations also propose moving the responsibility of designating TEA’s from individual states to the Department of Homeland Security (DHS). Unfortunately, under the current rules unscrupulous regional center operators took advantage of lax USCIS enforcement of what constitutes a TEA. Those same individuals used “loopholes” leading to abuses of the EB-5 program. A perfect example of the abuse was when EB-5 funds were used at the lower investment threshold and funding prime Manhattan, NY and Beverly Hills, CA properties, utilizing poor and impoverished areas nearby which saw absolutely no benefit for the use of their unemployment plight.  The proposed TEA definitions are much more restrictive.

The two significant changes stated above have generated the most concern amongst EB-5 practitioners. The larger dollar amount increase will create extra burdens and documentation associated with proving lawful source of funds, path of funds and also exacerbate the ever increasing difficulty associated with currency exchanges and wire transferring money out of foreign countries.

Keeping in mind that regional centers, developers and current projects that are presently fundraising around the globe will face new challenges as to whether the subjects of their investment activities comport with the new regulations. It is quite possible and most probable that many of the existing EB-5 projects in the marketplace will no longer qualify for the lower threshold of investment. This begs the question, will these projects be able to raise EB-5 investment capital at the higher threshold? How many projects may not be able to complete their EB-5 raise? What are the consequences for existing investors and projects that may not be able to go forward? How many projects in the EB-5 pipeline that can no longer qualify for the lower threshold amount, will fail?

All of the changes previously discussed have no impact today, as the existing EB-5 laws remain the same at this time. Potential EB-5 investors today can submit their application based on the current law and guidelines until the new regulations are implemented. We cannot stress enough, that anyone considering an EB-5 investment should move quickly if they want to file under the current requirements, as the long rumored changes are now more of a reality and will occur in a very short period of time. Potential EB-5 investors should not be confused into thinking that anything has changed with the existing rules. The new regulations do not affect anyone who files before they become effective and talk of draft legislation is simply that: talk. There actually is no meaningful new EB-5 legislation that is imminent. Do not be fooled that new legislation may fix the situation. The reality is the dollar amount for investment in EB-5, as it has long been rumored, is going up and there is now a limited time to take advantage of the current TEA qualified $500,000 investment.

As of right now there are over 800 USCIS approved regional centers. An approval of a regional center does not mean the regional center will provide you with the immigration success that is truly each investors’ goal. You need to look for an EB-5 regional center with a long history of success and one that will show you the greatest likelihood of achieving your goal of permanent residency in the United States.

CMB Regional Centers (CMB) is one of the oldest active regional centers in the EB-5 industry with over twenty years of experience. CMB has over 5,300 investors from 99 countries, representing over $2.9 billion in EB-5 investment capital within 69 partnerships. To date, CMB’s investors have experienced 4,800 I-526 approvals, over 1,100 I-829 approvals, repayment of nearly $1 billion in EB-5 investment capital from CMB borrowers, and a return of capital (or in the process of returning capital) to investors in 20 CMB EB-5 partnerships.

The answer and solutions to the questions posed above relating to how prospects and regional centers will deal with the coming changes to EB-5 have been answered easily by CMB. CMB has structured our current and future projects with bridge financing in place. Therefore, all current CMB partnerships have structured projects to provide for the full capital stack in place before commencing the project. This structure protects all EB-5 investors in the case regulation changes occur in the middle of an EB-5 raise. If all the EB-5 financing was not raised prior to new regulations, the project would still move forward and construction would finish. This would benefit any EB-5 investor in the project, since they can rely on the same amount of job creation presented in project documents presented to the USCIS. CMB continues to structure our partnerships with the goals of the investors in mind and to give them the greatest likelihood of achieving a permanent U.S. green card. CMB has a 100% approval rate on all of our partnerships that have been adjudicated by the USCIS. 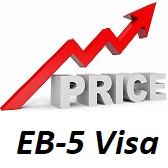 &nbsp; ROCK ISLAND, Ill., Rumors have spread throughout the EB-5 world that the EB-5 program is dead! For years, many in the industry have predicted changes...

Where are All the EB-5 Real Estate Juggernauts?

Three years ago, proposed changes to the EB-5 regulations were published by the United States Citizenship and Immigration Service (USCIS) for the first time. ...