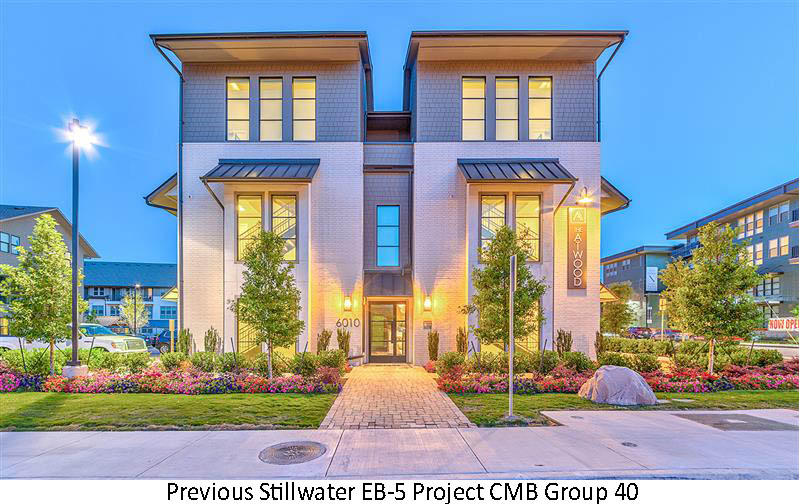 CMB Regional Centers proudly announces the full repayment of the 49 EB-5 Loan Repayment, CMB Group 65 “Stillwater Deep Ellum” EB-5 loan. The Group 65 partnership provided a $15 million loan to an affiliate of Stillwater Capital Investments, LLC to help fund the development and construction of a 336-unit multi-family apartment complex in the Deep Ellum neighborhood of Dallas, Texas. The construction of the project created 613 direct and indirect jobs, which easily meets the EB-5 job-creation requirement of 10 jobs per investor.

CMB Regional Centers President, Noreen Hogan, provided these insights: “The Group 65 project in the Deep Ellum community of Dallas, has succeeded in job creation beyond what we initially projected. Throughout construction and for the foreseeable future, this newest addition of 336-unit upscale life-style apartments is going to help write a new chapter in the history of Dallas’s beloved Deep Ellum district. We are grateful to have played a part but also think it is important to recognize others that were a part of the project’s success.”

Noreen added, “Even though the Deep Ellum community is located near the Central Business District of Dallas, and Baylor Medical Center, it was going through a reawakening of sorts. The history and future vision of the residents and businesses in the district are in the DNA of this project. When we evaluated the project for EB-5 funding, we took note of how high the unemployment numbers were in the area and after careful analysis, there was confidence we could help stimulate the community’s economic development and create a positive impact. The CMB Group 65 project combined EB-5 funding with the perfect development partner, in Stillwater Capital to make those visions a reality.”

Aaron Sherman, Partner and Co-Founder of Stillwater Capital, noted, “Our vision for a project is to add value to the community and to the people who will live there. Partnering with CMB has taught us about adding additional value to the communities by using EB-5 funds to make the projects happen. As a result, the community benefits as new economic development becomes nourishment for strengthening businesses, neighborhoods and the lives of residents. The Stillwater team commits ourselves to that vision from the very start and we do not waiver until the project is completed.”

The CMB and Stillwater Capital relationship has also resulted in the collaboration on projects that are outside of the EB-5 arena. CMB’s ownership, the Hogan family, has built NHK Capital Partners (NHK), a successful non-EB-5 investment platform. NHK offers its investors quality investment opportunities that provide risk-adjusted returns with exposure in the U.S. commercial real estate market, which is typically reserved for institutional investors. NHK’s first offering was with Stillwater, which provided funding for a lifestyle multi-family development in San Antonio.

NHK’s upcoming offering will again partner with Stillwater for a development in McKinney, TX, one of the fastest growing cities in the U.S. and part of the Dallas - Fort Worth Metroplex. The Storybook McKinney development, is a visionary residential development featuring a community of 240 rentable single-family residential homes, integrated with high-demand lifestyle amenities for today’s active families.

CMB Regional Centers is one of the oldest and most successful regional center operators within the EB-5 program.  Since CMB’s initial authorization as a regional center in 1997, more than 5,700 immigrant investor families have invested in a CMB EB-5 opportunity. Today, CMB operates 15 regional centers and has raised over $3 Billion in EB-5 funds, resulting in the creation of more than 186,000 new American jobs. In 2021, CMB surpassed $1.4 Billion in EB-5 Loan repayments.

&nbsp; &nbsp; You can read his comments in the full article: https://www.eb5investors.com/blog/eb5-visa-reauthorization-reform-2022 Contact us today if like...

&nbsp; &nbsp; You can read his comments in the full article: https://www.eb5investors.com/blog/eb5-visa-reauthorization-reform-2022 Contact us if...