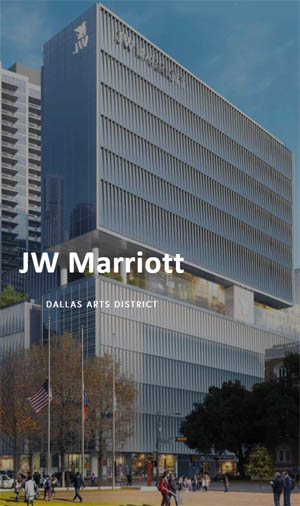 NHK Capital Partners, LLC (NHK), an affiliate of CMB Regional Centers (CMB) and part of the Hogan Companies, announces it has fully subscribed its second investment offering, the JW Marriott Hotel in Dallas, Texas. NHK raised $10.5 million for the development and construction of this new luxury hotel located in the heart of the Dallas Central Business District, which will be developed by the Sam Moon Group.

The new JW Marriott Hotel in Dallas, TX, will be the first JW Marriott branded hotel in the Dallas metro area, projected to be finished and open for business in Q4 2022. This JW brand is known around the world as the flagship of the Marriott name and was a much needed addition to the downtown Dallas business district. Today, there are 80 JW Marriott hotels throughout the world, of which 33 are located in the United States. Considering that Dallas-Fort Worth is the 4th largest and one of the fastest growing metropolitan areas in the U.S. with over 7 million residents, the Sam Moon Group could not have chosen a better time for this project.

NHK was founded in 2018 and builds upon the Hogan family’s other successful enterprises that are the leaders in their respective industries. The long successful history of the Hogan Companies comes from the leadership of Patrick Hogan, but today the companies are run under the leadership of the next generation of Hogan’s - Noreen and Kevin Hogan.

Pat first founded Rock Island Auction Company (RIAC) in the 1990’s and since 2003, it has been the #1 antique and collectible firearms auction house in the world. Today, RIAC is under the leadership of Kevin Hogan, President of RIAC. Under Kevin’s leadership, RIAC continues to set world records in the sale of antique and collectable firearms.

Later in 1997, Pat founded CMB Regional Centers, which is the leading regional center in the EB-5 Immigrant Investor Program. CMB has raised over $3 billion in EB-5 investment capital from nearly 6,000 investor families from over 100 countries. In 2018, Noreen Hogan was named the President of CMB, and is known as an expert in the EB-5 industry. Noreen continues to be a leader in the EB-5 industry through her involvement in industry trade organizations and her presence as a speaker at many industry events throughout the year.

NHK Capital Partners, through Noreen and Kevin’s leadership, is beginning to build a reputation for itself. The first NHK project, the Augusta Street Lofts consisted of a luxury apartment complex in San Antonio, TX. The 262-unit apartment complex has already started pre-leasing and is on schedule to begin allowing residents to move in over the next quarter.

If you would like to learn more about NHK and its next offering, please contact NHK to schedule a free initial consultation with an industry professional.

NHK engages Prevail Capital, LLC, a broker-dealer registered with the SEC and a member of FINRA and SIPC, to be the administrative placement agent for all NHK partnerships.
Share This Post: Twitter | LinkedIn | Facebook