In 1988, the Base Realignment and Closure Commission (“BRAC”) recommended the closure of several bases throughout the United States including the Norton Air Force Base (“Norton AFB”). A total of 29 California military bases were either closed or re-aligned during this period. As a result, California lost more than 187,000 jobs or nearly 60% of all jobs lost nationally to base closures. Since 1993 there have been five separately announced Base Realignment and Closure recommendations which further caused tens of thousands of additional job losses throughout California.
The U.S. Air Force’s socioeconomic impact analysis report (DOA 1993) stated that the base had supported 12,600 jobs (military and civilian) in 1987, falling to 10,400 by 1990, and was down to 6,653 jobs (including 2,133 civilian jobs) by 1994 when the base officially closed down. The report projected that if the base was not repurposed, only 50 direct and 20 secondary jobs would remain for basic maintenance and security. The downsizing of Norton AFB’s operational capacity strongly correlates with a general increase in the unemployment rate (which is based off of the civilian labor force) in the City of San Bernardino from 1990 to 1994, as depicted in the graph below.
Unemployment Rate in the City of San Bernardino 1990 to 1994

It is important to note that the drop in the unemployment rate between 1993 and 1994 coincides with a 1.42% decrease in labor force participation. What this simply means is that some of those who were formerly considered unemployed became either discouraged workers who no longer actively sought employment, or they left the area entirely.
According to the DOA 1993 report, the closure of the base led to a loss of over $290 million in annual direct labor earnings from the base and much more in indirect impacts to the surrounding communities. Over 9,400 direct jobs were lost during the closure with another 3,200 indirect lost that depended directly on the base. The base also had approximately $934 million in annual expenditures as per its 1989 budget, all of which would no longer flow to the local economy. The closure had severe ripple effects that resonated all through the city and county, of which neither have fully recovered even to this day.
Norton was a logistics and heavy-lift transport facility for a variety of military aircraft, equipment, and supplies as part of the Air Force Logistics Command (1946–1966), then part of the Air Mobility Command (1966–1994). This left the base highly specialized to military operations and therefore requiring significant investments to convert the buildings and infrastructure to civilian use. A new road network had to be constructed that was robust enough to support heavy industrial warehouse trucks. Furthermore, the whole sewer system had to be redesigned and built to meet new standards for civilian use. Though government funding was available for some development, it was restricted to specific areas and required matching funds to be put up before it could be released. This left an enormous funding gap that threatened to stall the whole redevelopment effort. No one was willing and able to readily invest in the area especially considering the extensive environmental remediation that was needed and the general economic turmoil in the area.
Private capital and investment was hard to attract to the area due to the sheer scale of work needed to incorporate the base into civilian use, and the uncertainty in continued support for the redevelopment.
The city of San Bernardino has been struggling to recover ever since the 90’s. Of the 100 biggest cities in the U.S., San Bernardino, located 60 miles east of Los Angeles, was ranked among the top five poorest large cities in the nation in the 2010 census. Two years later, with 30.6 percent of its population below the poverty level, it filed for bankruptcy, a symbol of the country’s worst urban woes.
In light of the above, CMBs investment and foresight were instrumental in transforming a truly needy region. In early 1997 CMB applied for and received Regional Center designation by the U.S. Immigration and Naturalization Service (the predecessor agency to the USCIS). The geographic scope of the Regional Center was centered on closed U.S. military bases in California, hence the acronym, “CMB” (California Military Base). CMB’s original designation focused upon six former military bases located in the areas known as the “Inland Empire” in Southern California and the County of Sacramento in Northern California. CMB’s particular focus initially was the revitalization of former U.S. military base areas located in these two regions. CMB’s Regional Center application and approval included the George AFB, Norton AFB, March AFB, McClellan AFB, the Sacramento Army Depot and the Mather AFB.
The Inland Valley Development Agency (“IVDA”) was created as a Joint Powers Authority comprised of the County of San Bernardino and the Cities of San Bernardino, Colton, and Loma Linda. Formed in 1990, the IVDA was responsible for the development and reuse of the non-aviation portion of the former Norton Air Force Base in a comprehensive effort to replace jobs that were lost as a result of the military base closure. As noted above, funding shortfalls for many of the efforts hindered efficient operation and threatened to derail many aspects of the master redevelopment plan.
As early as 1998, CMB’s investments in the former Norton Air Force Base through the IVDA served as seed capital for the area’s infrastructure redevelopment. This allowed the IVDA to obtain matching funding from the federal government. CMB was the only organization willing and able to provide the much needed matching funds for federal grants to be released towards the massive infrastructure projects that were being undertaken.
In 2002, the IVDA entered into an exclusive master disposition and development agreement with Hillwood – a Perot Company. Beginning in 2007 and working with the IVDA and later directly with Hillwood, CMB funds were utilized in the successful public-private partnership known as Alliance-California which is now home to multiple Fortune 100 and 500 firms.
From 2007 to 2011, CMB provided over $101 million direct funding to the redevelopment of the Norton AFB and local infrastructure through eight EB-5 limited partnerships. The funding was in the form of low-cost loan capital to the IVDA and the San Bernardino International Airport Authority (“SBIAA”).
CMB Limited partnerships that invested in the Norton AFB Redevelopment:
In 2007, CMB Investment Group A, LP (“Group A”) provided a $5 million loan to the IVDA in support of what is now known as the Stater Brothers project. Stater Brothers agreed to locate their new approximately $380 million dollar corporate office, grocery distribution center and cold storage facility to the former military base. Projects constructed from Group A funds include; a landfill hard cap that provides parking for trucks, buses, and cargo containers, Tippecanoe Roadway work, and increasing ingress and egress to the new Stater Brothers facility. USCIS acknowledged 1,707 jobs from the development, however, the 1,707 jobs that were acknowledged were far fewer than were actually created. An IMPLAN analysis that considers all capital expenditures for the projects into which Group A contributed, results in the creation of over 3,800 jobs, over $177 million in income, and over $488 million in output as shown in the tables below. 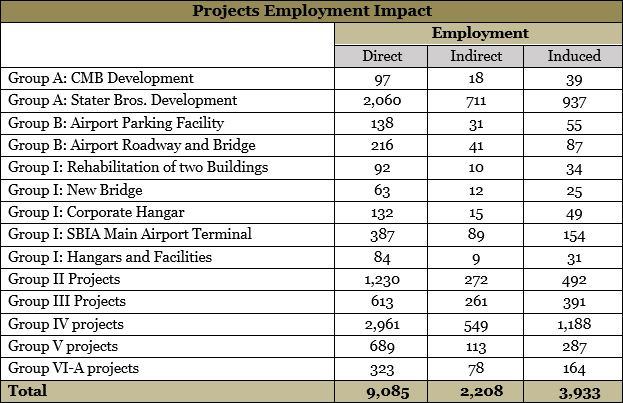 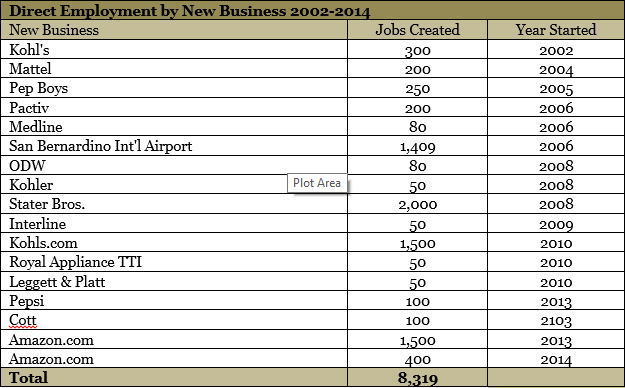 To access the full economic impact of this direct employment, IMPLAN direct effect multipliers for the appropriate industry and year were applied, revealing the total effect in terms of employment, labor income, value added, and output as shown in the table below.

Economic Impacts of Operating and Maintenance Spending At the IVDA & SBIA
The report utilized information received from the IVDA and SBIAA financial audit reports from 2011- 2014, the total annual operating and maintenance spending related to the IVDA and SBIA were distributed into different SB county industries. The full analysis tables are included at the end of this article. This category of spending was expected to create 455 jobs with additional total output of $54 million.
Economic Impacts of Increases in Assessed Valuation
The Alliance Impact 2015 report also analysed the total increase in assessed property values by year. Their analysis was constructed based on the information obtained from the February 5, 2015 RSG “Better Communities, Bolder Futures, 2014-2015 Property Tax Revenue Verification and Projections.”
For the modeling purposes, the additional revenue received from the increase in assessed values was multiplied by the local property tax ratio and then distributed respectively between State/Local government non-educational spending (70%), and educational spending (30%). The increase in assessed values created 2,395 jobs with additional output of $253 million. Modeling results from this category can be found at the end of this article.
The new business development has also expanded the federal and local tax base. It is important to note that the EB-5 Program does not use tax revenues since the United States Citizenship and Immigration Service is funded by user fees. Further, the immigrant investors also contribute to the federal and local tax bases of the regions in which they finally settle, being that these high net worth individuals are taxed on their worldwide income.

Impact of Investors settlement in the US

EB-5 immigrant investors spend a great deal of money settling into the country. The article here analyzes the impact of this settlement spending to the economies where the immigrants finally settle. Applying this methodology to the 304 investors over the partnerships above shows creation of 866 jobs with a contribution of over $179.5 million to GDP and the tax base. If we consider just the amount directly invested at the Norton Air Force base, we get 576 jobs from 202 investors and generate over $119.3 million to GDP and tax revenue.

CMB Regional Centers limited partnerships injected over $101 million in EB-5 capital to the economically distressed area of the former Norton Air Force base. This massive contribution of capital combined with the other public funds created the foundation for economic growth and development that saw a once ravaged abandoned area, transformed into a thriving logistics hub employing thousands of people. As we have clearly shown, EB-5 creates many more jobs than are actually reported and its impacts go much further than the initial investment made. All this comes at zero cost to the tax payer.
USCIS reporting requirements recognized only 6,100 jobs at the time of the investment into the respective projects. However, over 31,951 jobs have actually been created in and around the base which increases to 32,527 if we include the economic activity created from the wealthy immigrant’s settlement. This clearly illustrates the far reaching effects properly channeled EB-5 funds can make to distressed communities around America. 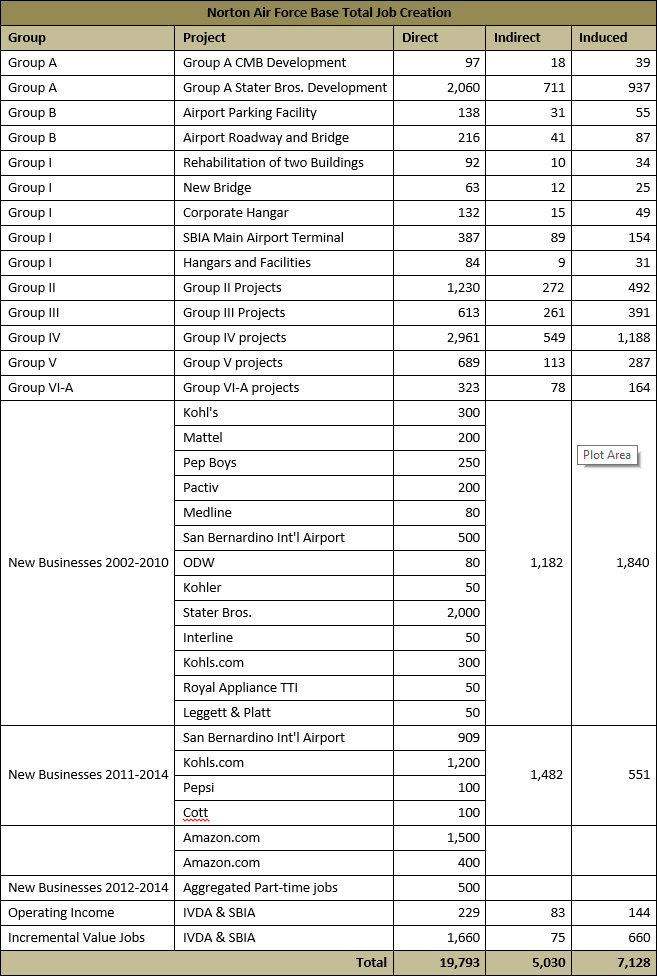